Mobile Phone use as a Navigational Hazard 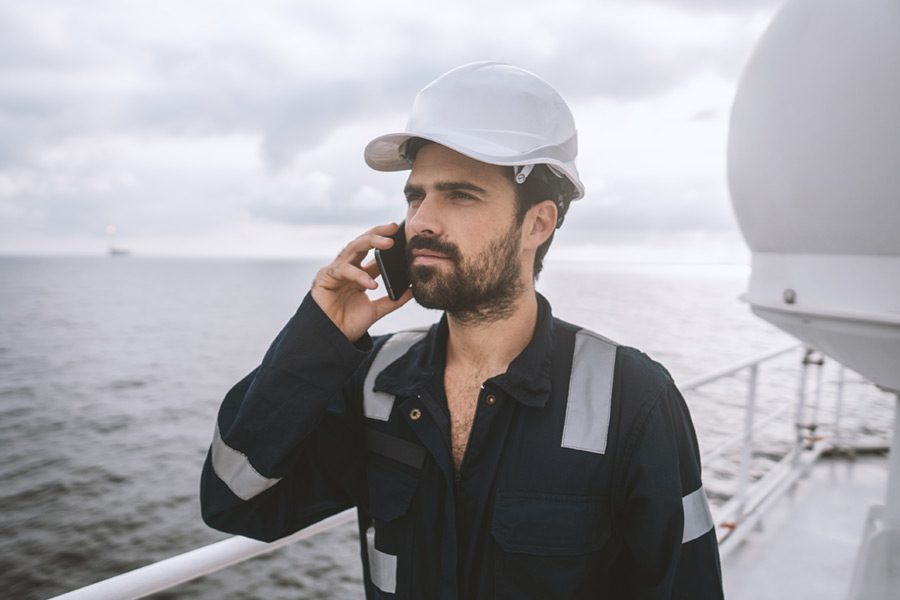 Warnings about the dangers of mobile phones use when navigating in busy waterways and during pilotage were first recognised over 12 years ago. The most recent incident involves a collision between a tug and barge unit and a large bulk carrier in US waters. It occurred while the tug master engaged in a mobile phone personal call while also communicating by VHF with the pilot of an approaching bulk carrier. The US National Safety Transport Board singled out the tug master’s use of his mobile as the primary cause. Their finding being that it had distracted the master from his legally prescribed lookout and navigation duties.

In terms of the intensity of operator distraction, research has shown that the use of a mobile phone while driving a car (whether in hands free mode or not) is equivalent to driving while being under the influence of alcohol at the legal limit. In the USA and many countries these limits are now set at 0.08% for private drivers and may be as low as 0.04% for commercial drivers. For airline pilots the limit is commonly set at 0.04% and as low as 0.02%. The updated STCW Convention limit for mariners is now 0.05% when on duty and a maximum of 0.08% when off duty.

The dangers of the distraction caused by use of mobile phones while driving a road vehicle are well recognised and many countries consider their use by a driver to be a criminal offence. Despite the imposition of heavy fines and jail sentences, drivers continue to flaunt the law with some of them even reading and exchanging text messages. Many innocent people have died or been crippled for life as a consequence and massive liabilities have been incurred.

Why are warnings being ignored?

Driver aberrant behaviour appears to be due to a gross failure of awareness of the intensity of mobile phone use distraction and the very high level of risk which it presents. In 2005 the UK’s Maritime Coastguard Agency (MCA) recognised from navigation accident trends that similar human element problems existed on board ships. The MCA’s Guidance Note MGN 299 on Unsafe Navigation Caused by Mobile Phone Use recommended that strict limits be placed on the use of mobiles during navigation. Further, that these limits should be set out in the ISM Code procedures for both shipping companies and on board their ships.

Should mobile phones be banned from the bridge?

Regrettably, the dangerous distraction problem has not been solved and has undoubtedly been worsened by the technical advancement of mobile phones into mini-computers providing multiple communication platforms as well as games and video entertainment. As a consequence, the maritime industry seems to be moving towards a position that not only should the use of mobile phones and similar devices be restricted during navigation, they should be banned entirely from the bridge and other risk critical areas.

Banning of course brings its own dangers in that prohibition may actually encourage furtive utilisation. So what should a shipowner and/or ship manager do? Ban mobile phones and other similar devices from the bridge and other critical areas? Or rely on the good judgement of shipboard personnel aided by increased risk awareness and training based on ISM Code and company procedures? To aid the decision process, shipowners and managers need to carefully consider the significant risks and exposures to liabilities they may face.

The number of navigational incidents and ‘near misses’ that involve mobile phones and the distraction they cause must by now number in the thousands. Some are reported and have been found by investigating maritime authorities to be directly causative of collision and grounding incidents as well as oil pollution during bunkering and cargo operations. These include the recent collision incident in the US referred to above as well as ships grounding as the master or OOW engaged in calls to agents or personal texting. If such an incident does in fact occur, then the costs in terms of both vessel damage and consequential losses can of course be very high.

MM members should bear in mind that the use of mobile phones while navigating could be construed as being in breach of Rule 5 of the COLREGS which specifically requires that the bridge team “…maintain a proper lookout by sight and hearing as well as all means appropriate…”. Under the terms of the Merchant Shipping Acts in many countries (e.g. UK, Singapore, Hong Kong), a breach of Rule 5 could also be construed as being the criminal offence of operating a vessel in an unsafe manner. This can lead to the imposition of fines and imprisonment against both the offending party and the owner. Further, if the breach is found to be causative of a collision, then this would weigh heavily against the shipowner in relation to the ultimate apportionment of blame.

The message to MM members, their ship managers and crews is that mobile phones are amazing tools for both expediting ship’s business and keeping seafarers in touch with their families and friends. However, they can also be highly dangerous in terms of the distraction they cause if their use is not carefully controlled. MM would therefore strongly encourage its members to accomplish the following:

If you do not have a clear and well implemented mobile phone use policy in place for your fleet, then a mobile phone related incident is waiting to happen. Please don’t wait for what could be a very nasty result.

Deck barges are the work horses of marine transport. They are in common use all around the world for the carriage of bulk cargo, general cargo and containers in both international and domestic trades.... This RB is designed to raise awareness of deck barge stability regulation and the need to ensure compliance through ready access to approved stability data and securing procedures.
READ MORE >>

Tug and barge units provide a relatively simple and low-cost method of transporting dry bulk, liquid and container cargoes, typically over domestic trade routes. However, these benefits need to be considered against a number of associated stability and safety risks. This Risk Bulletin is intended to raise awareness of tug stability regulations and hazards and recommend practical loss prevention measures.
READ MORE >>

Ship capsize incidents are often due to inadequate ship stability caused by a sudden and unplanned rise in the ship’s Centre of Gravity (CoG). Tragic consequences include injury, death, pollution and total loss of ship and cargo. All ships are exposed to this potential danger but some ship types and trades are much more exposed than others.
READ MORE >>

In today’s highly regulated shipping environment, members sometimes voice their concerns about the amount of time and effort spent on facilitating shipboard inspections by flag state, class, port state control, charterers and their insurers . Why are all of these separate and apparently similar surveys necessary?
READ MORE >>