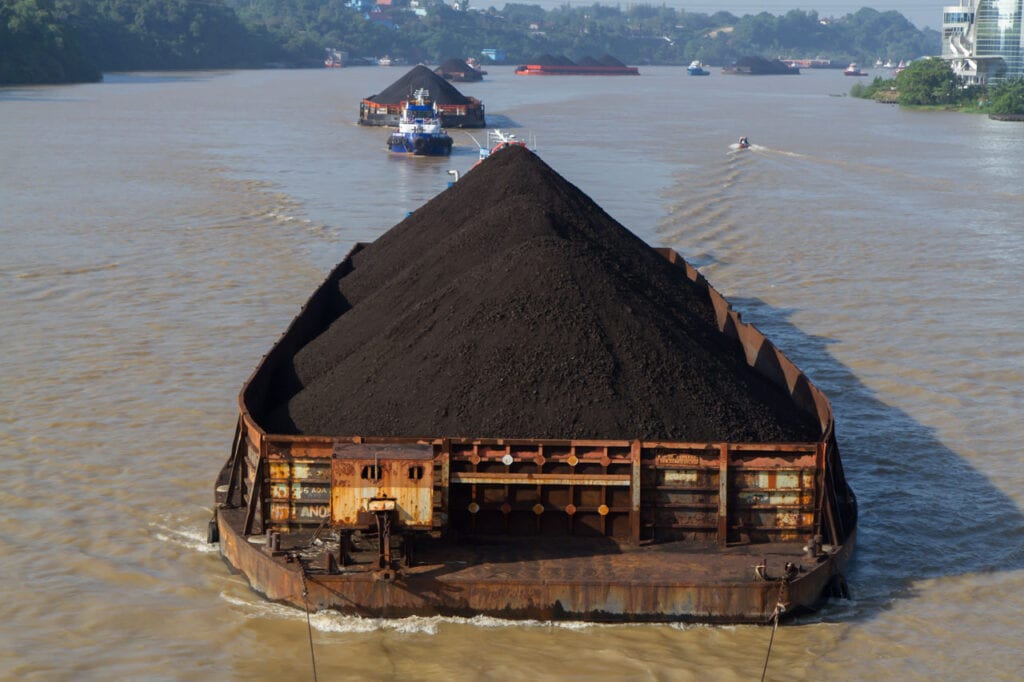 Deck barges are the work horses of marine transport. They are in common use all around the world for the carriage of bulk cargo, general cargo and containers in both international and domestic trades. Due to their boxlike hull form, a deck barge’s stability margin will generally be adequate even when fully loaded. However, this positive stability characteristic often leads to complacency and errors resulting in barge capsizes, cargo damage, pollution and loss of life. This RB is designed to raise awareness of deck barge stability regulation and the need to ensure compliance through ready access to approved stability data and securing procedures.

The outside perimeter of deck barges is often fitted with steel sideboards (as depicted in the above photo) to facilitate the transport of bulk cargo. This includes coal, iron ore, nickel ore, gravel and other bulk commodities.  Such barges may also be used to carry project cargoes, such as steel pipe and heavy equipment. Deck barges without sideboards as usually used for the transport of containers on inter-island feeder trades.

Members are referred to the Barge Stability Guidelines published by Maritime New Zealand. They provide an illustrated and easy to understand introduction to basic deck barge stability together with practical advice. MM recommends that these Guidelines should be downloaded and made available on board all tugs that are engaged in towing deck barges. A copy should also be kept together with the stability booklet for all deck barges as an assistance to its understanding and use.

The obligation for an international trade deck barge to be measured for freeboard and be provided with a valid Load Line Certificate and adequate stability data is stipulated by the International Load Line Convention (ILC 1966/1988).

The details of the stability requirements for deck barges are prescribed by the International Stability Code (ISC 2008 IMO Res. MSC.267(85)) which refer to these vessels as ‘pontoons’. They are defined as being:

With respect to deck barges used in domestic trade, it is generally the case that they will also be defined as ‘vessels’ under national Non Convention Vessel Standards (NCVS) rules. The important point here is that deck barges – whether engaged in international or domestic trade – are not exempt from flag state loadline and stability requirements and regulatory compliance is always essential.

Section 2.2.2 provides that a deck barge owner should present the following data to their flag state administration for approval and use as a stability booklet.

Part B, Section 2.2.3 provides the methodology for the performance of the requisite stability calculations which must include the full range of operating drafts. Section 2.2.4 provides the recommended and minimum intact stability criteria. This includes the requirement to maintain a minimum positive GM of 0.15 m. at all times.

For deck barges in domestic trade, the ILC 1966/1988 and the ISC 2008 will not usually apply directly. Instead, these requirements are often replaced by Non-Convention Vessel Standards (NCVS) for loadlines and stability, as enacted into national law by the flag state.

The Indonesian NCVS, Chapter 6, Loadlines, provide a useful example. These rules make it a requirement for all Indonesian domestic trade vessels (inclusive of deck barges), which are not provided with an ILC 1966/1988 Load Line Certificate and are over 24 m. in length, to be subjected to an inclining test. They must also be provided with stability data approved by the Indonesian flag state administration and their appointed RO, Class BKI under Class Rules Part 8. Domestic and Part 6. Statutory which refers to Volume 3, Guidelines on Intact Stability 2014 Edition.

The aforementioned BKI Guidelines on Stability are based on the recommendations contained in the IMO’s ISC (2008) as amended. They include specific stability requirements for pontoons/deck barges. The result of this is that there appears to be no real difference between the stability requirements for a deck barge whether engaged in the Indonesian international or domestic trades.

There are, however, some Indonesian NCVS moderating features that Members who operate deck barges should to be aware of. They are noted as below:

Members are also reminded that flag state administrations may have imposed load line and stability requirements for deck barges in domestic trade which are under 24 m. in length. Examples include Canada, Australia and Indonesia. It is therefore essential for Members to confer carefully with the appropriate flag state administration and/or their RO to ensure that all deck barges which they operate – regardless of size or trading area – are in full compliance with all applicable international and/or national loadline and stability regulations.

Bulk cargoes are normally loaded using conveyor belt systems which deposit the cargo within the barge perimeter sidewalls. The ultimate height of the cargo and its Centre of Gravity (C of G) and distance above the barge’s Keel (KG) will depend on its density (or weight per cubic meter) and what is known as its maximum ‘angle of repose’. In turn, the cargo’s KG in combination with the barge’s KG and Metacentre (M) at the permitted load draft and resulting displacement will determine the transverse stability and righting moment (GZ) of the loaded barge.

For deck barges, the aforesaid stability information is usually provided in a simplified format known as a ‘Limiting KG Curve’. This plots the height of the combined barge and cargo KG against the barge’s loaded displacement and/or draft. As illustrated at pages 10-11 of the Barge Stability Guidelines , the KG curve provides a ready reference to ‘safe’ or ‘unsafe’ loading by personnel with often limited stability training.

By way of illustration, the photo of the coal barge at the top of this Risk Bulletin shows the height of its coal cargo to be approaching the width of the barge. Was its stability within the required safe GZ zone? Based on previous cargo loading experience, it may have been. However, effective risk management requires that the barge’s stability data should have been checked by the tug master and the loading supervisor to confirm it was within GZ ‘safe zone’ tolerance for transporting its bulk cargo of coal at the loaded draft.

In terms of cargo securing and its potential impact on stability if cargo shifts, Members will be aware that for cargo and container ships over 500 GT in international trade, SOLAS Chaps. V and VII require that all such vessels be provided with a flag state approved Cargo Securing Manual (CSM). Bearing in mind that deck barges in international trade are defined by IMO conventions as ‘vessels’, it seems clear that all such deck barges must be provided with and utilise an approved CSM.

With respect to deck barges carrying general cargo and containers in the domestic trades, the requirement for a CSM to be provided and utilised will be subject to the relevant NCVS standards and flag state law. Research suggests that there may be only a few flag state administrations in the Asian region that have enacted national regulation which makes CSMs mandatory in the domestic trades.

Accordingly, if Members operate a deck barge in a domestic trade where the provision and use of a CSM is not mandatory then, if their barge is carrying general cargo and/or containers, MM recommends that it be provided with a CSM which has been prepared by a naval architect and which complies with relevant IMO and SOLAS Guidelines. If this is not done, then the result may well be as depicted in the adjacent photo or much worse.

With reference to stability hazards during loading and throughout the planned transport, it is important that the weights of all general cargo and containers be both readily available and reliable. This data must then be used in conjunction with an approved stability booklet to ensure the adequate stability of a deck barge carrying a cargo which is properly secured.

Ensuring adequate deck barge stability and associated cargo securing is essential to ensure full regulatory compliance, deck barge and cargo safety and the optimisation of MM insurance cover. MM would like to recommend three practical steps that Members should take to help accomplish this:

Clean Petroleum Product (CPP) tankers transport a variety of refined petroleum types. The risk of cargo admixture contamination therefore always exists. One of these risks is ‘last cargo’ residue left in cargo tanks and lines due to inadequate ‘next cargo’ pre-load cleaning. This Risk Bulletin focuses on the tank cleaning/cleanliness risk and the associated issues
READ MORE >>

The recent capsize and sinking of the MV Gulf Livestock 1 in typhoon conditions resulted in the death of 41 seafarers and livestock specialists together with about 5000 breeding cattle destined for the Chinese dairy market.... The creation of this Risk Bulletin has been motivated by the above incident....
READ MORE >>

Ship bunkering generates a higher than usual port risk scenario due to the potential for bunker tank overflows, the bursting of defective bunker hoses or leakage from faulty bunker manifold connections.... This Risk Bulletin is intended to provide a reminder to all Members, their Ship Managers, Masters and Chief Engineers of the necessity for comprehensive bunker planning and implementation ...
READ MORE >>