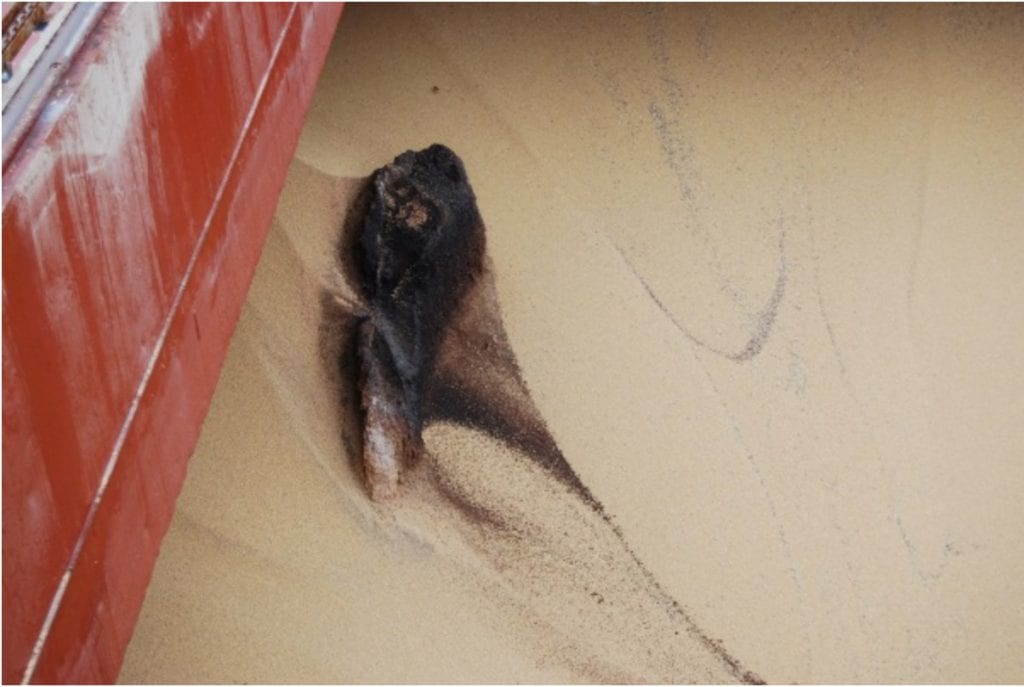 The ingress of seawater through steel cargo hatch covers and wet damage to cargo presents a high-cost risk for shipowners and their P&I insurers. The black column of wet grain in the above photo illustrates this.

Shipowners will also know that due to the usual P&I cover deductible, there is no such thing as a cost-free cargo claim. So why do these wet cargo claims continue to occur and what practical measures can be taken to minimise and optimally prevent such losses?

Ships were originally fitted with cargo hatch covers consisting of wooden hatch boards supported by steel beams that spanned the hatch opening. Up to three layers of heavy canvas tarpaulins were then pulled across the hatch boards and all of this was secured using steel side battens and wooden wedges. Steel locking bars were then placed across the top. It was a simple process and it worked well but it required a large amount of time and manpower for hatch opening and closure. 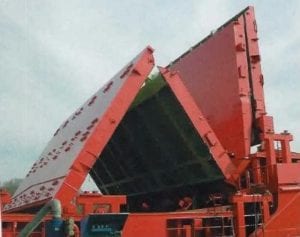 Bigger ships and smaller crews led to the invention of the mechanically folding steel hatch cover. Commonly known as MacGregor hatches, they consist of interlocking steel panels made weathertight by rubber packing fitted inside the edges of the steel panels which mates with a steel compression bar fitted on the hatch coaming. If the rubber packing and compression bars are properly maintained, the hatches will be weathertight and cargo damage will be avoided. The application of planned hatch maintenance and regular weather tightness checks by the ship’s crew are therefore critical processes. Regrettably, P&I Club loss data shows that the proper application of these processes continues to be misunderstood or simply ignored.

The underlying premise of a contract of carriage of goods by sea is that the shipowner is obligated to deliver the cargo in the same condition as it was loaded on board. Not surprisingly, cargo which has been wetted by seawater will invariably result in a recovery claim being made against the shipowner carrier by the cargo consignee and their cargo insurer. Dependent upon the nature of the cargo and the amount of water ingress these claims can be very substantial.

Few shipowners and even fewer shipmasters understand that the bills of lading under which the cargo is carried will normally incorporate The Hague Visby Rules (HVR). These Rules provide a number of helpful cargo damage claim defences to the shipowner. Members should note that under Class I Rule 4.19 (i) the contract of carriage by sea must contain exemptions from liability no less favourable than those available under HVR. In terms of encountering heavy weather and seawater ingress, the most important HVR defence is damage caused by ‘perils of the sea’.

The downside is that the ‘perils’ defence will not be available to the shipowner unless they are first able to prove that they have personally exercised due diligence to make the vessel seaworthy and cargo-worthy both before and at the beginning of the relevant voyage. The most important aspect of this test will be the shipowner’s ability to provide strong evidence that the cargo hatches were weathertight when the vessel left port. How can this be best accomplished?

Shipowners will be aware that their ships will be issued with a revalidated Load Line Certificate (LLC) on an annual basis. This process should include the inspection and testing of hatch cover weathertightness using high-pressure fire hoses. Unfortunately, there are two serious problems with the LLC as a form of weathertightness evidence. One is that Class inspectors, acting as RO’s for flag state, will sometimes not bother to conduct LLC hatch hose testing as it can be a laborious and time-consuming task. The other is that, even if done properly, this test only certifies hatch weathertightness as of the date of the test and does not later evidence the exercise of due diligence ‘before and at the beginning of the [relevant] voyage’ as stipulated by the HVR.

The risk is that if cargo wetting and damage occurs, shipowners and their P&I insurers may have no evidence to support their entitlement to the ‘perils of the sea’ defence to a seawater ingress claim even if the weather encountered during the voyage was much worse than normally expected in the voyage area at the relevant time of year. As such, the shipowner could be subject to at least the cost of the deductible element of their P&I cover as well as the entry of a loss on their P&I insurance claims record. Their shipper/customer will likely also be unhappy with the cargo insurer being the only winner in recovery terms.

The ‘due diligence’ solution is for shipowners to ensure that hatch cover maintenance and regular weathertightness testing is conducted on board their ships as an integral part of each vessel’s ISM Code Planned Maintenance system. This process will require the following steps to be taken:
• The creation of a detailed shipboard maintenance plan based on the hatch manufacturer’s build, operation and maintenance specifications.
• The provision and upkeep of adequate spare parts and seals.
• Crew training to ensure the proper implementation of the plan (the STCW Convention has only recently required ship’s officers to be competent in relation to the maintenance and securing of steel hatch covers).
• Regular testing and log book recording of hatch weathertightness by the ship’s crew or independent surveyors using either high-pressure water streams or, alternatively, an approved ultra-sonic hatch testing device.

MM members and their crews can also benefit from the knowledge and experience of MM surveyors when they attend on board to conduct P&I surveys. This will include inspecting and testing cargo hatches for weathertightness. The attending surveyor will discuss his findings with the master and note the full details of any hatch cover defects and his repair recommendations in his report. They should be actioned by the member as a matter of priority to ensure that P&I cover is not compromised,

Seawater damage to cargo continues to be a major source of shipowner losses and P&I claims. Most of it is preventable through the application of ‘due diligence’. In shipping terms, this includes the application of good seamanship in the regular inspection and maintenance of cargo hatch covers, together with the careful recording of these activities.

Yes, the aforementioned process will require time and effort. Yes, there will be a cost to set up, provide spares, train the crew and then internally audit the implementation of a proper hatch maintenance system to ISM Code standards. However, the overall loss prevention expenditure will likely prove to be less than the cost of the P&I deductible element generated by a single wet cargo damage claim. On top of this will be the cost of the negative impact on the shipowner’s claims record and the prospective loss of customer goodwill and revenue. Better then to invest first in keeping cargoes dry.

A number of books on the subject of steel hatch covers have been written that explain the construction, operation and maintenance of the several varieties of hatch covers now found on board. One of the best of these manuals is the book from which the title of this Risk Bulletin has been borrowed being, Ships’ Hatch Covers, Keeping Cargoes Dry, by Capt John Fairclough. Regrettably, although published quite recently in 2015, it no longer seems to be available. A good alternative is the Nautical Institute publication Hatch Cover Inspections: A Practical Guide by Walter Vervloesem. MM is pleased to recommend these books to their members and would encourage them to place copies on board all of their ships as both a primer and working manual on the subject of steel hatch cover maintenance and weathertightness inspection.