ISM Code related deficiencies lead as cause of PSC detentions 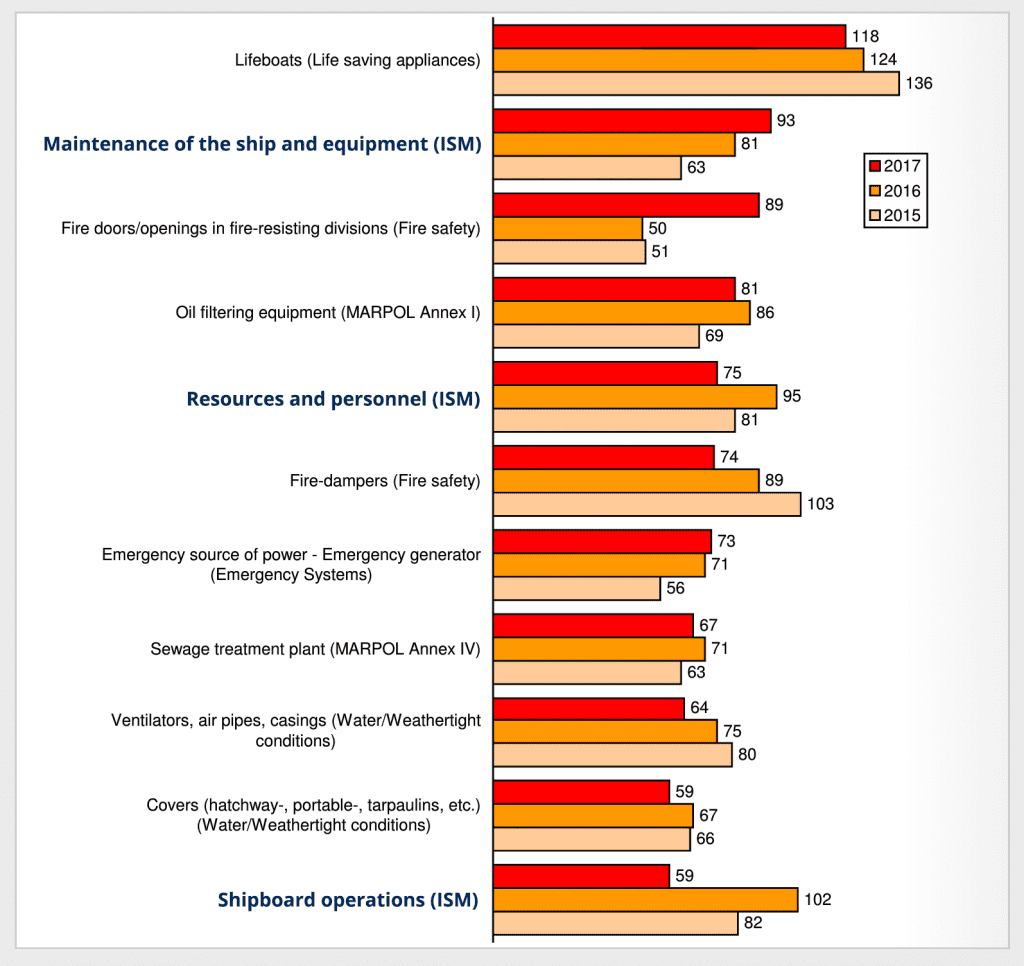 All commercial ships over 500 GT which trade internationally are subjected to Port State Control (PSC) inspections on a regular basis. As shown in the above comparative graph, Tokyo MOU statistics show that ISM Code related deficiencies continue to be the most frequent cause of PSC ship detentions with a collective total of 731 such cases during 2015 – 2017. This Risk Bulletin will therefore focus on the ISM Code segment of the IMO’s PSC Inspection Guidelines and the suggested steps that MM members should take to avoid ISM Code non-compliance and PSC detention of their vessels.

The ISM Code was created as an IMO priority response to dangerously unsafe management practices both ashore and at sea. Its incorporation as Chapter IX of SOLAS makes ISM Code compliance mandatory for all commercial vessels over 500 GT trading internationally. Subject to the provisions of Non-Convention Vessel national law, the ISM Code may also be mandatory on board all vessels (both under and over 500 GT) engaged in domestic trades.

The IMO, as a UN agency, cannot directly enforce compliance with any of the IMO Conventions or Codes. This must be left to Flag States and their appointed Recognised Organisations (ROs). Many of them have done a poor job.  However, PSC – acting under the authority granted by the United Nations Law of the Sea Convention (UNCLOS) –  also have this power and they are intensifying its use on board foreign flag vessels that enter into their Port State jurisdictions. It is therefore important for MM members to be fully aware of the connection between PSC inspections and powers and shipowner compliance with the ISM Code.

The IMO’s Resolution A.1119(30) PROCEDURES FOR PORT STATE CONTROL, 2017 and its 17 Appendices provide detailed Guidelines on the conduct of Port State Control (PSC) inspections. Their more than 110 pages cover every aspect of a ship’s regulatory compliance with the SOLAS, MARPOL, STCW conventions and their associated IMO Codes, Resolutions and Circulars. The application of these IMO Guidelines by PSC authorities is not mandatory but they are “invited” by the IMO to do so with the goal of harmonising all such inspections on a global basis.

The ISM Code inspection segment of the aforementioned PROCEDURES is contained within MSC-MEPC.4/Circ.4, GUIDELINES FOR PSC OFFICERS ON THE INTERNATIONAL SAFETY MANAGEMENT (ISM) CODE. The key elements of their operation are explained below.

Inspection of the ship and its Safety Management System (SMS)

1.3 Port State control officers (PSCOs) do not perform safety management audits. PSCOs conduct inspections of ship, which are a sampling process and give a snapshot of the vessel on a particular day.

If the attending PSCO is not required to perform a safety audit, then just what is he/she required to do in relation to inspecting the ISM Code Safety Management System (SMS) on board?

The PSC process is well established and will normally begin with an “initial inspection” and “opening meeting” between the attending PSCO and the Master. This process will start with a review all of the ship’s certificates inclusive of the flag state ISM Code Document of Compliance (DOC) issued to the shipowners and the Safety Management Certificate (SMC) issued to the ship. It should be noted that a deficiency in either the DOC or SMC certificates in terms of their content details or validity will likely result in the vessel being detained until rectified.

The “initial inspection” process will then normally progress to include a cursory inspection tour of the vessel. If the PSCO observes no technical or operational-related deficiencies during this tour, there will be no need for him/her to inspect the implementation of the ISM Code as this will be deemed to be satisfactory.  However, if there are observed deficiencies, this will normally constitute “clear grounds” for conducting a “more detailed inspection” of the vessel inclusive of ISM Code implementation. For example, the observation of a hatch cover deficiency suggests that the ISM Code requirement for the operation of a shipboard Planned Maintenance scheme and the reporting of non-conformities may not be functioning.

Subsection 6.1.3 of the IMO’s PSC Guidelines provides that if there are anytechnical and/or operational-related deficiencies found during this inspection they should be, “…individually or collectively considered by the PSCO, using their professional judgement…”. The PSCO should then advise whether in terms of  associated ISM Code implementation:

Subsection 7.1.2 provides that if there are technical or operational-related deficiencies reported which:

In summary, it can be seen that PSC inspections are not designed to accomplish an audit of a vessel’s SMS in relation to either content or its on board implementation. The PSC starting point will therefore be a simple review of the content and validity of a vessel’s DOC and SMC certificates during the “initial inspection” phase. However, if the PSC inspection progresses to a “more detailed inspection”, this also opens the door to a PSC assessment of any associated failure or lack of effectiveness of the ship’s SMS and ISM Code compliance and possible PSC detention.

How then to avoid such a situation? The obvious solution is to ensure that your fleet is always well maintained in full accordance with its ISM Code Planned Maintenance System and all regulatory requirements. This is not always continuously feasible in an industry where ship’s crews are now small and time in port is often short. One answer to this problem is to ensure that all pre-arrival deficiencies observed by the Master, officers and crew are entered to the SMS system as non-conformities and are reported to shore management. This demonstrates ship and shore awareness and an intention to rectify and close-out the deficiency from the system within a defined period. Do nothing and your Master’s omission can become an admission to PSC that your SMS is little more than unworkable pieces of paper.

The other important PSC inspection tactic is to ensure that your Masters always take the “opening meeting” opportunity to advise the attending PSCO of any pre-existing deficiencies in the vessel. This should of course include the results of any previous PSC inspections and any required rectifications which remain outstanding. All such “opening meeting” advice should be accompanied by the provision of the ship’s current SMS non-conformities reports. The desired outcome is to assure the attending PSCO that the SMS is not a failure and does not lack effectiveness. Thus, although deficiencies may exist, the vessel should be provided with the necessary PSCO permission to complete the planned rectifications and not be detained.

The purpose of this Risk Bulletin and its links is to highlight the important connectivity between the PSC inspection system and the ISM Code. In short, if technical or operational deficiencies are observed by a PSCO, then this will almost certainly lead to a PSC assessment of the effectiveness of ISM Code implementation. If a negative assessment and PSC detention then follows, this can result in revenue losses (inclusive of off-hire), unplanned port costs to the owner’s account and a PSC ship detention post to the Equasis website reporting system which is open to public view. Not a good place to be.

It is essential that all of the parties engaged in the operation and maintenance of a vessel understand their roles in ensuring a positive outcome following a PSC inspection. It follows that the same parties must also appreciate that their fully engaged compliance with the obligations imposed by the ISM Code is a critical part of this process. MM would encourage its members to share this Risk Bulletin with their ship managers, their Masters and crews as an integral part of minimising our members’ exposure to risks and optimising their market reputations and profitability.

Clean Petroleum Product (CPP) tankers transport a variety of refined petroleum types. The risk of cargo admixture contamination therefore always exists. One of these risks is ‘last cargo’ residue left in cargo tanks and lines due to inadequate ‘next cargo’ pre-load cleaning. This Risk Bulletin focuses on the tank cleaning/cleanliness risk and the associated issues
READ MORE >>

The recent capsize and sinking of the MV Gulf Livestock 1 in typhoon conditions resulted in the death of 41 seafarers and livestock specialists together with about 5000 breeding cattle destined for the Chinese dairy market.... The creation of this Risk Bulletin has been motivated by the above incident....
READ MORE >>

Ship bunkering generates a higher than usual port risk scenario due to the potential for bunker tank overflows, the bursting of defective bunker hoses or leakage from faulty bunker manifold connections.... This Risk Bulletin is intended to provide a reminder to all Members, their Ship Managers, Masters and Chief Engineers of the necessity for comprehensive bunker planning and implementation ...
READ MORE >>