One of the main benefits of liferafts is that even if the seas are too rough to launch a ship’s lifeboats or a ship is listed too heavily for its lifeboat davits to function, the crew will still be provided with a means of escaping a sinking vessel. The other very positive feature is that a liferaft fitted with a Hydrostatic Release Unit (HRU) will automatically release, float free and inflate even if a ship should suddenly break up or capsize. However, a liferaft’s float free and self-inflation system will not work if its HRU is not properly fitted or maintained. Flag State, Port State Control and P&I surveyors are still faced regularly with such HRU related deficiencies. This Risk Bulletin is therefore focused on this on-going and potentially life threatening problem.

The key component of a liferaft’s ability to float free from a sinking ship is the HRU which is an integral part of the securing of a liferaft’s protective fibreglass canister fitted in a steel rack on deck. It will be attached to a canister securing strap in combination with what is known as a weak link to which the liferaft’s painter (mooring line) is also connected. The HRU (coloured orange in this bulletin’s photos) is pressure operated and is designed to release automatically when the raft canister and its HRU are submerged to a depth of four metres.

After release the liferaft canister will float to the surface because of its internal buoyancy. This action pulls out the painter which is now only connected to the vessel by the weak link. When the painter is pulled all the way out, a gas cylinder inside the canister is activated and the liferaft inside the canister inflates. The buoyancy force of the inflated liferaft will be sufficient to break the weak link. The liferaft will then rise to the surface, fully inflated and ready for boarding by survivors.

In addition to the HRU automatic release system, liferaft canister securing must also be fitted with a manual release system. This is normally provided by fitting a hook shaped device, known as a senhouse slip, to the canister strap. In a controlled ship abandonment event, the liferaft canister retaining strap would be released by opening the senhouse slip. The painter would then be detached from the weak link and re-secured to a strong point on the ship e.g. the ship’s rail. The liferaft would then be thrown over the side and the painter pulled out to inflate the liferaft. The painter re-securing sequence is very important because, if the raft is thrown over the side while only secured to the ship by the weak link, the dynamic shock on landing may break the weak link instead of pulling out the painter. The result being that the painter and entire liferaft could be irretrievably and fatally lost. 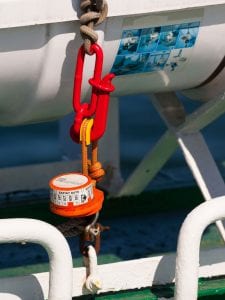 Why are HRU systems still not being fitted properly?

One of the main problems seems to be that shipboard personnel often do not properly understand the function and operation of the three primary components (HRU, Weak Link and Painter) which, in combination, make up the interconnected HRU system. If any one component is wrongly connected, then a liferaft’s float free and self-inflation functions will fail. This problem is intensified by the fact that there are a significant number of different HRU types available from a variety of approved manufacturers. They all designed to perform the same pressure activated automatic release function but their connectivity within the overall liferaft canister securing and release arrangement may differ.

What solutions are available to ensure properly functioning HRU systems?

MM’s recommends to their MM members that they action the following steps:

Despite the fact that the fitting of HRUs to shipboard liferafts has been mandatory under SOLAS since 1973, the issue of their improper installation and inadequate maintenance is still a prevalent problem. In summary, part of the problem is caused by the variety of HRUs that been approved for use and the differences this can produce in the precise manner in which they are to be integrated into the liferaft automatic release and inflation system. The other part of the problem appears to be inadequate crew training and familiarisation with HRUs, inclusive of their installation, maintenance and operation.

The ultimate price of HRU failure can be very high. It is therefore essential that all HRUs in service be properly fitted and their functioning re-validated on an annual basis by an approved liferaft service depot. Alternatively, disposable HRUs must be replaced and properly re-fitted at the manufacturer’s designated interval. MM members are invited to assist in meeting the safety challenges addressed in this Risk Bulletin by downloading the UK MCA’s Guidance Note MGN 343 (M&F). They are also directed to the very interesting dissertation research done on the HRU problem by P. De Lima Filho and his numerous photos of incorrectly secured liferafts which it contains. MM members should then review and implement the five MM loss prevention steps which have been recommended for use on board the ships in their fleet.