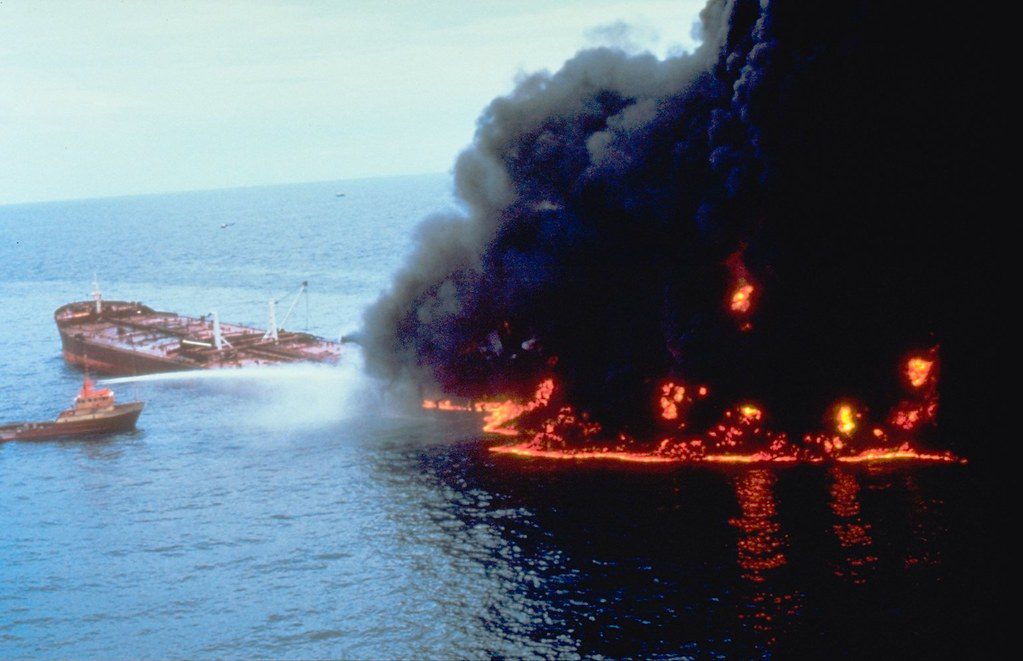 Could Gulf of Oman attacks escalate to this?
Photo Credit: Collection of Doug Helton, NOAA/NOS/ORR.

As has been widely reported, missile and limp mine attacks took place on two large crude oil tankers navigating at the western end of the Gulf of Oman on 13 June 2019. These attacks appear to be an escalation of the four tanker attacks that took place off Fujairah on 12 May 2019. The purpose of this Risk Bulletin is to ensure that MM members – regardless of the flag their ships fly – are fully aware of the significant dangers now posed to shipping in the Persian Gulf, the Straits of Hormuz and the NW sector of the Gulf of Oman.

MM members will no doubt be aware of the long existing and unfortunate tensions between Iran and Saudi Arabia. The US added to these tensions by its withdrawal from the UN endorsed ‘Joint Nuclear Deal’ (JND) with Iran. The recent tightening of sanctions on Iran’s export of crude oil have also impacted heavily on Iran’s economy by greatly restricting its crude oil customer base. These actions have been strongly criticised by the EU and other JND nation state partners as being provocative and were recently described by Iran as “US economic terrorism”.

The perpetrators of the aforementioned tanker attacks are alleged by the US and Saudi Arabia to be Iranian military forces. These allegations are emphatically denied by Iran’s leaders. Meanwhile, investigations by all parties concerned continue.

War Risk insurance is of course an important issue. Decisions relating to the imposition of additional premiums for marine war risks in potentially dangerous areas are made by the Joint War Risks Committee (JWRC) in London. Acting on specialist security advice, the JWRC extended the JWRC Listed Areas on 17 May 2019 to include the Gulf of Oman, the UAE and the Gulf and Red Sea Coasts of Saudi Arabia. MM members are advised that if they are currently trading in these areas or plan to do so, then they should confer with their H&M and P&I broker to ensure that additional war risk premiums are agreed and appropriate cover is in place.

As advised above, the JWRC has extended its ‘Listed Areas’ which are defined as “areas of perceived enhanced risk.”  No advice is provided by the JWRC as to the magnitude of the risk.

Current advice from leading war risk insurers is that for vessels operating in the Persian Gulf, Strait of Hormuz and North Western Gulf of Oman:

BIMCO have issued a security advisory which suggests that members should consider diverting their ships away from the area of the last attack. BIMCO added their further assessment that, “Tensions in the Strait and the Gulf are now at the highest they can be without an actual armed conflict.”

MM advises their members and their masters to exercise extreme caution when operating in the Gulf of Oman/Strait of Hormuz/Persian Gulf region. MM’s recommendations include but are not limited to the following:

A Security Threat is described by the BMP5 manual as consisting of the three sides of a ‘Threat Triangle’ labelled as Capability, Intent and Opportunity. Capability means attackers have the physical means to conduct an attack. Intent is demonstrated by continued attacks. The shipowner can do little or nothing about these two sides of the threat triangle.

Conversely, Opportunity is a function of time, place and accessibility. This side of the Threat Triangle can be influenced by shipowners and their crews through application of the BMP5 mitigation measures. In short, if the Opportunity side of the triangle is minimised, then the threat and risk are minimised and can even be negated. This must therefore be the goal of the shipowner and the shipboard team.

The current high tension and high risk situation in the Gulf of Oman/Strait of Hormuz/Persian Gulf region may well escalate if Iran is forced to further reduce its oil productivity and foreign sales. This is a situation that requires very close monitoring and the greatest possible care by MM members who may be trading or plan to trade in that area. It is essential that this care includes the implementation of both BMP5, ATP 02.1 and the Global Counter Piracy Guidance documents which provide a powerful blueprint for their ships’ defence and crew safety.