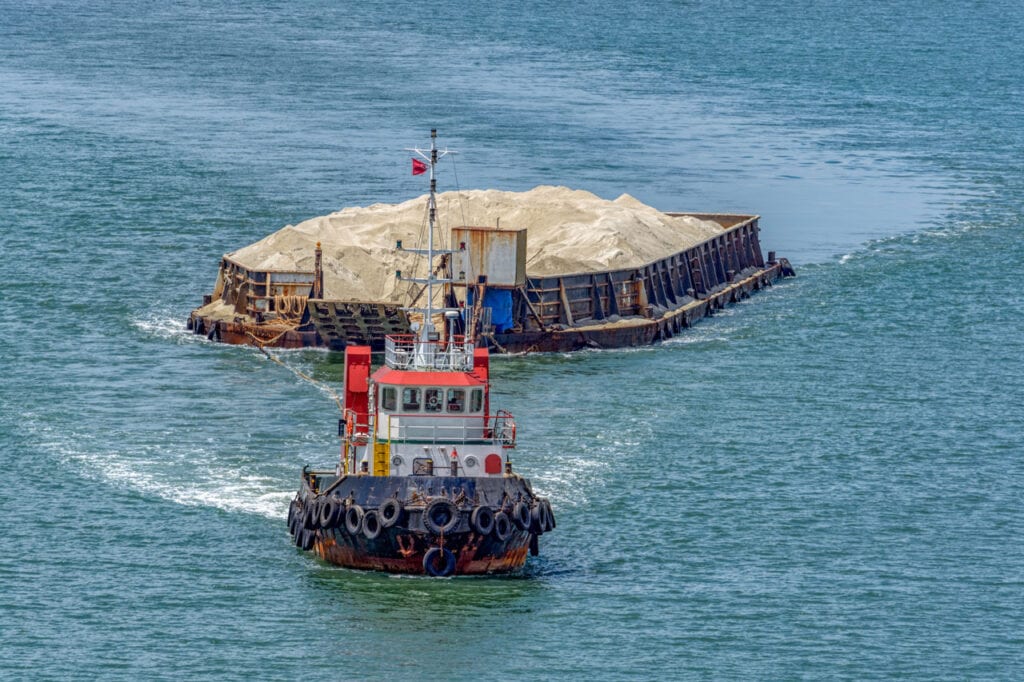 Tug and barge units provide a relatively simple and low-cost method of transporting dry bulk, liquid and container cargoes, typically over domestic trade routes. However, these benefits need to be considered against a number of associated stability and safety risks. In particular, tugs can be subjected to high levels of towline forces when connected to a loaded barge. Many tug losses and crew fatalities have occurred as a consequence. This Risk Bulletin is intended to raise awareness of tug stability regulations and hazards and recommend practical loss prevention measures.

The fundamentals of vessel stability (regardless of vessel type) and the applicable regulation, operational guidelines and crew competence requirements are discussed in the first six sections of the previous MM Risk Bulletin No. 30.  This Risk Bulletin builds on these stability fundamentals to consider their application to Conventional Tugs, along with the additional towline forces unique to barge towing operations.

The obligation for a tug to carry adequate stability data is provided by the IMO’s International Loadline Convention ILC 1966 and 1988 Protocol (ILC 1966/1988) and SOLAS. The details of the stability data required is contained in IMO Res. MSC.267(85) (as amended) which is commonly referred to as the International Stability Code 2008 (ISC 2008).

For tugs in international trade, the ILC 1966/1988 and the ISC 2008 applies to cargo vessels and “other marine vehicles” (inclusive of tugs) over 24 metres in length. Part A, Chapter 2, General Criteria, provides mandatory and minimum statical and dynamic stability requirements, inclusive of severe wind and rolling criterion. Part B, provides non-mandatory Recommendations and Additional Guidelines for Certain Types of Ships which specifically include pontoons (flat top barges), offshore supply ships and fishing vessels.

Oddly, Part B of the ISC 2008 made no specific Recommendations in relation to tug stability and the additional and potentially hazardous towline forces which can impact on a tug’s stability when it is towing. This tug stability ‘gap’ in the ISC has been filled by IACS Recommendation 24 (amended to 2013) and MSC.415(97) of 2016. The  critical tug safety outcome is explained below under the sub-heading The ISC Code ‘Gap’ and Towline Forces.

For tugs in domestic trade, the Non-Convention Vessel Standards (NCVS) for stability, as enacted into law by the flag state, will normally apply. The Indonesian NCVS, Chapter 6, Loadlines, rules provide a useful example. These rules make it mandatory for all Indonesian domestic trade vessels and tugs over 24 metres in length to be subjected to an inclining test and for the master to carry stability data on board which has been approved by the Indonesian flag state administration or their appointed RO (Recognised Organisations), Class BKI.  With respect to stability details and minimum standards to be adhered to, the NCVS rules make specific reference to the ISC 2008.

Members are also reminded that flag state administrations may have imposed load line and stability requirements for tugs which are under 24 metres in length but over 150 GT. Examples include Canada and Australia. It is therefore essential for members to confer carefully with the appropriate flag state administration and/or their RO to ensure that all tugs which member’s operate – regardless of size or trading area – are in full compliance with all applicable international and/or national loadline and stability regulations.

The ISC 2008 tug stability ‘gap’ has been effectually filled by IACS Recommendation No. 24 (as amended to 2013). It does this by first confirming that ISC 2008 Part A Chap 2.2 and Part B Chap 2.4 provide the basic (internal vertical forces only) stability requirements for a tug. It then advises the necessity to apply an additional IACS formula which recognizes and incorporates the towline bollard pull (external horizontal forces) to the final tug stability calculation. This results in a more accurate and reliable set of safe heeling and righting curves for use by a tug master

It is apparent that a number of flag state administrations have adopted IACS Recommendation No. 24. An example is provided by Indonesia’s flag state administration (Seacom) through its RO, Class BKI. The BKI Guidelines on Intact Stability 2014 incorporate IACS Recommendation No. 24 so as to facilitate the accurate assessment of tug stability, inclusive of towline forces.

The question which remains for Members is whether or not the stability booklets on board their tugs require updating to the recommended IACS and IMO standards now required? Again, this is an issue on which Members should confer carefully with the appropriate flag state administration and/or their RO to ensure full regulatory compliance.

When a tug is underway, without a barge attached to a towline, its design stability will normally be adequate to deal with all of the internal and vertical weights expected to be on put on board. This includes towing equipment, fuel, stores, fresh water and crew. An ISC 2008 based allowance will also have been made for the forces of wind and waves. Thus, apart from the daily and gradual consumption of fresh water, fuel and stores there will usually be very little change in, or crew concern about, a tug’s stability condition throughout a non-towing voyage.

The danger is that the above ‘no worries’ scenario is transformed just as soon as a tug’s towline is attached to a barge which is significantly heavier that the tug. When this occurs, an additional and lateral force (impacting negatively on stability) is created by the weight on the towline (bollard pull). This weight acts through a force lever measured by the distance between the point of the towing hook or winch connection point and the centre of the propellers. Its effect is to suddenly decrease a tug’s stability.

This new and additional force, in combination with any significant misalignment of the towline with the direction of the barge, can quickly lead to a dangerous stability situation known as ‘girting’. If this takes place, the tug can be dragged over on to its side to a point where its low freeboard maindeck edge quickly becomes immersed. In tug stability ‘righting lever’ terms, this is the point of ‘vanishing stability’. The tug may then not be able to right itself and, if quick release of the towline cannot be accomplished, a capsize will likely follow.

It was as a consequence of numerous tug losses and deaths due to the ‘girting’ scenario described above, as well as many similarly caused harbour tug losses and deaths during ship berthing and escort services, that IACS Recommendation No. 24 was developed and IMO’s amendment to the ISC 2008 was subsequently agreed. The ‘girting’ danger, which still exists, and the lives and tugs lost should therefore never be forgotten.

Small and conventionally propelled tugs engaged in towing barges can, at first sight, appear to be involved in a relatively simple operation which is not unduly hazardous or problematic in terms of tug stability. As outlined above, this is not in fact the case. Instead, tug operations require special care and consideration as a consequence of extreme towline forces which can present a serious stability hazard to a tug and her crew. This hazard is shown and demonstrated by a Transport Canada video which should be watched by all tug managers and crews.

MM’s recommendations to Members in relation to tug stability and associated loss prevention measures are provided below. Members should ensure that their tug managers and masters are advised accordingly and implementation then audited through incorporation into ISM Code/NCVS SMS manuals and procedures. The positive return to Members will be reduced risk and the optimisation of their MM insurance cover.