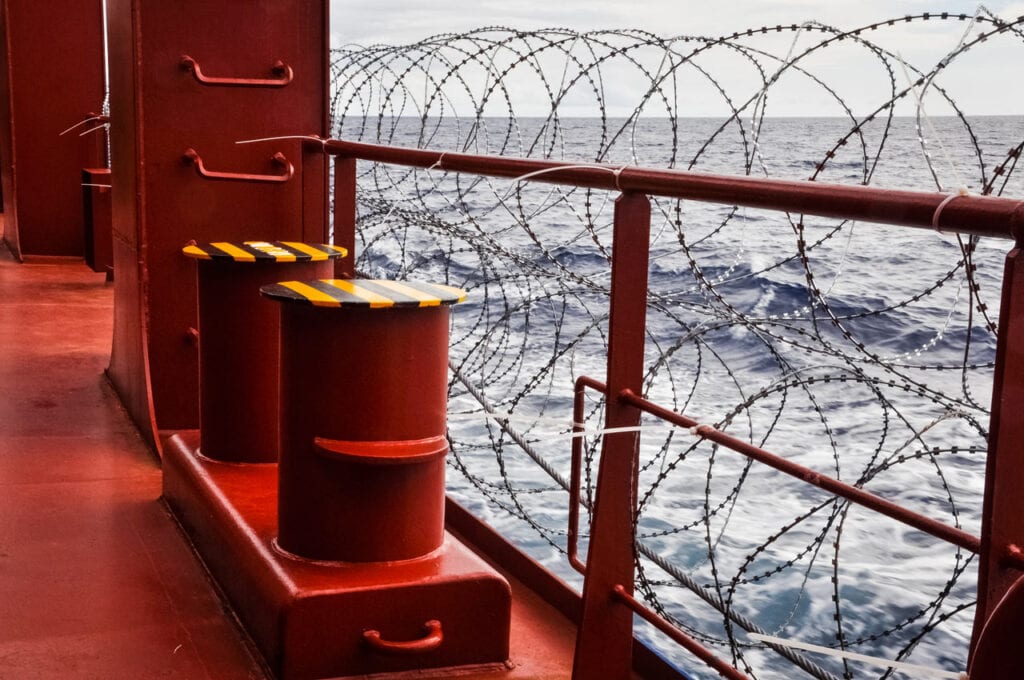 The International Maritime Bureau (IMB) has labelled the waters of West Africa’s Gulf of Guinea (GoG) as ‘the world’s worst piracy hotspot’, with crew kidnapping for ransom being the predominant revenue extortion tool. Treacherous and potentially deadly waters indeed.

This Risk Bulletin is focused on highlighting the piracy threats to ships and crew kidnapping while trading in or transiting the GoG. It provides industry best practice advice and links to GoG counter-piracy information and the international and regional organisations which are available to support safe passage in this area.

The GoG, situated on the African continent’s west coast, extends from Senegal in the north west to Angola in the south. Its coast line extends to 6000 km on which is situated 13 coastal littoral states, many of which are politically unstable and where corruption is reportedly endemic. This includes Nigeria and its oil production rich Niger Delta. Unfortunately, the Niger Delta also harbours the source of much of the GoG’s piracy problem in the form of readily mobilised and heavily armed criminal gangs and politically motivated insurgents.

GoG piracy activity has existed for decades. However, by 2010, it had developed into the well organised piracy, seizure and syphoning of tankers loaded with high value Nigerian crude and refined oil. This continued until 2014 when the global oil price collapsed along with pirated oil cargo sales profits. The pirates then shifted their revenue focus to crew kidnapping and ransom. This proved to be highly profitable and no perpetrators have ever been apprehended. Kidnapping therefore continues as the current and dominant piracy threat in the GoG.

In terms of incident numbers and piracy likelihood, the IMB reports that globally there were 135 crew kidnappings in 2020 out of which 130 took place in the GOG. For the first quarter (Q1) of 2021, there were 40 crew kidnappings globally and all of these occurred in the GoG. More GoG pirate attacks and kidnappings have occurred since, with the latest advice being the reported boarding of the bulk carrier CP Tianjin on 6 June 2021, while well offshore and 220 n.mi. south of Lagos, Nigeria.

Not surprisingly, the IMO and shipping industry organisations have been pressing for assertive piracy suppression in the GoG for the past decade. Numerous IMO resolutions have been issued and many millions of European Union funded Euros have been spent in the GoG on supporting the creation of regional collaborative piracy information sharing treaties and infrastructure. Regrettably, it appears that little of any measurable counter-piracy value to ship owners and their crews has been accomplished.

So what reliable counter-piracy resources and assistance are actually available to Members and their crews if their vessels are trading in or transiting the GoG? These crucial issues are discussed below, complete with recommended links which provide more detailed advice.

BMP West Africa, 1st Ed. 2020, is published by BIMCO, in concert with a number of well-known maritime industry organisations. This essential guide provides piracy deterrence and security advice for the coast of West Africa, inclusive of the GoG.

BMP West Africa is effectively the GoG focussed version of the well-known BMP 5 counter-piracy and security manual which was created to assist merchant ships and their crews in protecting themselves against piracy in Somalian waters. As such, BMP West Africa provides comprehensive advice on tried and tested counter-piracy methodologies.

The counter-piracy starting point for all ships transiting or trading in the GoG should be the provision of a hard copy or soft copy access of BMP West Africa to all masters and all designated ISPS Code Ship Security Officers (SSOs) and shore based Company Security Officers (CSOs). It is then essential that this publication and its recommendations are specifically incorporated into the vessel’s approved Ship Security Plan.

Maritime Security Chart Q6114, Ed 2 16.6.16, is published by the UK Hydrographic Office. It is specifically referred to in BMP West Africa and it is available from chart agents worldwide. Chart Q6114 provides counter-piracy security advice, self-protective measures, security procedures and regional contacts, as well as routing and reporting requirements which have implemented by military or security forces. It is designed to be utilised alongside regular navigational charts.

It is essential that an original copy of the latest version of chart Q6114 is made available on board all vessels trading in or transiting the GOG.  It should also be immediately available to all shore based CSOs.

MDAT-GOG is a security risk reporting and information sharing centre which is operated by the British and French navies. Designed to benefit all vessels trading in or transiting the GoG, it includes a real time GOG incident reporting map.

MDAT-GOG is a voluntary system in that it invites all affected vessels to report their position and other information when entering the GOG Voluntary Reporting Area (VRA) which is depicted on Chart Q6114. Full contact details are contained in BMP West Africa, Annex A – Contacts, as well as on Chart Q6114.

Participating vessels are requested to update their position to MDAT-GOG on a daily basis and to later report their exit from the VRA. The direct benefit is that MDAT-GOG undertake to advise any reported piracy incidents directly to all participating vessels which are within a radius of 50 n.mi. of any such incident.

Although not specifically advertised by the MDAT-GOG website, a further VRA participation benefit is that MDAT-GOG are in direct communication with the small fleet of British and European Naval vessels patrolling in the GoG as well as with regional security forces. This does not mean that VRA participation guarantees the provision of rapid response military force intervention. However, it can be inferred that VRA participation greatly improves the potential for receiving emergency assistance.

In the aforementioned circumstances, it is essential to the safety and security of all vessels trading in or transiting the GoG that their masters and crew participate fully in the MDAT-GOG coordinated VRA system.

BMP West Africa does not recommend or endorse the general use of a PMSC or the use of Security Escort Vessels (SEVs). Instead, it adopts a neutral position and advises that, “This is a decision [to be] taken by individual ship operators after carrying out a thorough risk assessment and in conjunction with permissions from the ship’s Flag State, the hull and cargo insurance, P&I club and any littoral states.”

BMP West Africa sets out the six factors which should be carefully considered by ship operators when deciding whether or not to engage the services of a PMSC and/or SEV.  Members should refer to these factors and should also confer with local agents to establish regional requirements. As an example, the Nigerian authorities will only permit the engagement of PMSCs which are licensed by the Nigerian Navy and they will not permit SEVs to operate within Nigerian territorial waters.

More information on PMSC and SEV services and GoG security advice is available from a number of specialist maritime security advisers. One potential source is UK based Dryad Global. Their comprehensive and recently posted report, ‘Gulf of Guinea Piracy’, provides valuable background and operational information.

Well in advance of entering the GoG or any other Joint War Committee (JWC) ‘Listed Area’, Members should confer with their insurance brokers to ensure that their vessel: 1. Has all of the necessary insurance covers in place, and 2. Any additional premiums required have been paid.  ‘Listed Areas’ are defined by the JWC as ‘areas of perceived high risk’. Details of these areas (last updated 20 Sept 2020), including the limits of the GoG ‘Listed Area’, are available on the Lloyd’s Market Association website by selecting the page link ‘JWLA-027 Cabo Delgado amended’.

Members are also reminded that the MMIA Rules of Entry, General Rule 29, specifically excludes cover for any liabilities, losses, damages or expenses directly or indirectly caused by or contributed to by part (i) kidnap and ransom and all claims arising from kidnap and ransom attempts. Members may therefore wish to consider the purchase of separate and specialised ‘Kidnap and Ransom’ (K&R) cover for their crew before entering any ‘Listed Area’ and, in particular, the GoG ‘Listed Area’

Despite long term guidance and funding from both international and European Union sources, the counter-piracy capabilities of the GoG littoral states in their territorial waters (12 n.mi.) and EEZ areas (200 n.mi.) are still far from what can be deemed as adequate and safe for merchant vessels. Regrettably, and despite Nigeria’s recent ‘Deep Blue Project’ announcements and Denmark’s recent decision to station a naval frigate in the GoG, it seems unlikely that the piracy and crew kidnapping problem in the GoG will be resolved satisfactorily in the near future. Members are therefore encouraged to be both prudent and self-reliant when transiting or trading in the GoG area. They should do this by first accessing and then distributing and applying the counter-piracy information and systems that are highlighted in this Risk Bulletin. Members are also encouraged to review the terms and scope of their insurance cover, prior to entry into the GoG and its associated JWC ‘Listed Area’, so as to ensure that their cover is sufficient to meet the special risks presented.