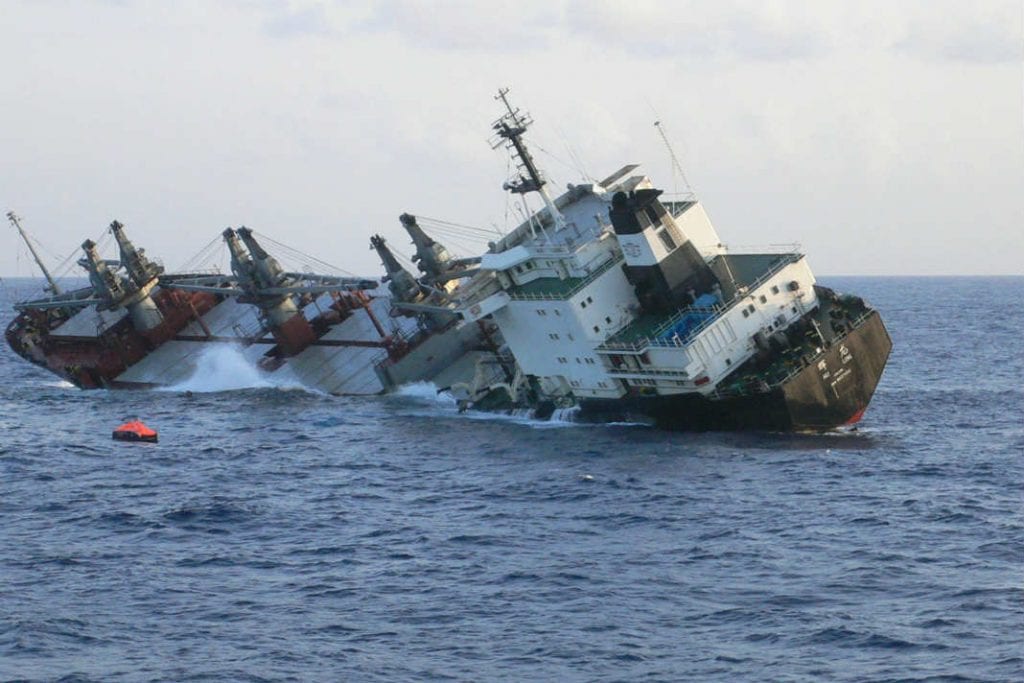 INTERCARGO is a well-known London based Non-Governmental Organisation (NGO) that represents the interests of bulk carrier owners. Its latest Bulk Carrier Casualty Report 2009 – 2018 has just been released. The Report analyses the likely root causes of 48 bulk carrier losses (over 10,000 DWT) during the past decade. These causes include Cargo Liquefaction, Collision, Flooding, Fire/Explosion, Grounding and Unknown factors. Cargo Liquefaction, occasioning the rapid capsize and sinking of nine ships, is shown to be the deadliest root cause resulting in 101 seafarer deaths (54%) out of a total of 188 deaths from all causes. It is a certainty that this number would be much higher if the cargo liquefaction losses of smaller bulk carriers had been included. This Risk Bulletin is therefore focused on providing a reminder of the extreme risks to ships and lives presented by Cargo Liquefaction.

An MM Risk Bulletin regarding the coming into force on 1 Jan 2019 of the IMO’s Res.MSC.426(98) amendments to the IMSBC Code was posted on the MM website in Nov. 2018. The amendments included increased obligations on cargo shippers in relation to Group A cargoes that are defined as cargoes which may liquefy in transit. They also included an expansion of the range of bulk cargoes that must be treated as Group A cargoes. This now includes Coal if 75% of the cargo is made up of particles less than 5mm in size. Separately, IMO circular CCC.1/Circ.2 warns that Bauxite, currently a Group C (not likely to liquefy) cargo, must now be treated as a Group A cargo (likely to liquefy) if it is observed to be wet.

The IMO’s amendments also amplified the shipper’s obligation to ensure that all Group A cargoes are properly tested using IMSBC approved methods to establish both their Transportable Moisture Limit (TML) and their on-site Actual Moisture Content (AMC) immediately before loading. Regrettably, the IMO did not address the deadly issue of shipper/charterer ignorance in failing to ensure proper cargo testing or, worse, deliberate collusion with mine operators to misrepresent bulk cargo TML and AMC. These omissions will doubtless cost more lives.

As stated above, the unfortunate reality is that shippers/charterers cannot always be relied upon to provide accurate and truthful information about the moisture content of bulk cargo scheduled for loading. This is a particular problem in developing economy countries where access to well-equipped laboratories capable of testing to IMSBC Code standards is often non-existent. An associated problem is that in such developing countries safety culture and enforcement regimes are often weak . In combination, these negative factors can generate a very high level of risk that a Group A cargo may be loaded with an AMC that exceeds its TML. If this should happen, the outcome has often proved to be catastrophic for the ship and deadly for all those on board.

In recognition of the aforementioned concerns, MM provides a warranty term applicable to all entered vessels which may be intending to load Group A cargo. It provides that:

“The vessel will not load, carry and transport any cargo designated as a “Group A” cargo specified in the International Maritime Solid Bulk Cargoes (IMSBC) Code, being cargoes which are susceptible to shifting due to liquefaction, unless otherwise agreed by the Association in writing in advance of loading the cargo”.

MM members can be assured that their written notification will be responded to promptly with written confirmation of cover and helpful advice on whether there is a necessity for independent lab analysis of cargo and the attendance of experienced surveyors.

In addition to notification to MM, what else can be done to minimise the dangers to ship and crew when loading Group A bulk cargoes at ports in developing economy countries in Asia and other parts of the world?  The answer lies in the combined application of knowledge, awareness, observation and the exercise of positive control. These risk minimisation factors are expanded on below:

Knowledge: MM members should ensure that the IMSBC Code 2018 edition is available on board all bulk carriers in their fleets as well as at their ship manager’s offices. Both hard and soft copies can be purchased from the IMO. A copy of IMO circular CCC.1/Circ.2 should be also downloaded and attached to the shore and shipboard copies of the IMSBC Code to ensure that warnings about wet Bauxite are not missed.

Awareness: Must be achieved by ensuring that Ship Managers, Masters and Chief Officers understand the serious dangers presented by Group A bulk cargoes. Helpful reading is contained in a Pocket Guide created by Lloyd’s Register (LR) and INTERCARGO. It is available in both English and Chinese from the LR website at Carrying Solid Bulk Cargoes Safely 2016

Chartering and Operations personnel must also be included in the Group A cargo awareness campaign. It is when Charterparty fixtures are being negotiated that shipowners must protect their interests and crew safety by insisting on the inclusion of the BIMCO Solid Bulk Cargoes that Can Liquefy Clause.

Observation: Knowledge and Awareness will improve the Master’s ability to conduct accurate on-site Observation of the nature and condition of the cargo to be loaded. Shippers have been known to misdescribe Group A cargoes as Group C in order to avoid the cost of laboratory analysis. Even if shippers provide a signed cargo analysis stating the AMC as being below the TML, this may have been provided by a mine site laboratory that was not equipped to ISMBC Code standards and/or was subject to the shipper’s influence.

Positive Control: Masters often come under considerable pressure from shippers/charters and mining site operators when loading Group A cargo. As noted above,  it may therefore be recommended that MM members appoint experienced marine surveyors to attend at site. They can support and assist the Master to ensure that all Group A cargoes, or other cargoes that may fall into that category due to particle size or moisture content, are in fact within IMSBC Code ‘safe to load’ parameters. This will include the use of the very simple but useful ‘can test’ which is prescribed by the IMSBC Code as essential if there are concerns relating to cargo moisture content.

If the can test indicates that the cargo is not within IMSBC Code parameters, then loading should cease and a second set of samples drawn for independent laboratory analysis. This is a situation in which it can be expected that the shipper/charterer and mine site operator will resist. The presence of experienced surveyors will assist the Master to overcome resistance and progress the further testing required. Commercial and legal support will be provided by the clear terms of the aforementioned BIMCO Cargo Liquefaction Clause which confirm the owner’s entitlement to cease loading without penalty.

The IMO have taken positive steps to improve the content and reliability of the IMSBC Code as well as recognise the dangers presented by Coal and wet Bauxite. They will no doubt continue to do so. However, virtually all of these steps have been motivated by bulk carrier capsizes due to cargo liquefaction and the loss of entire crews. The challenge for today’s shipowners and seafarers is to ensure that they do not become victims of cargo liquefaction and a further motivation at the IMO for IMSBC Code amendment. The challenge for seafarers, in particular, is to stay alive and not become a statistic in the next INTERCARGO Bulk Carrier Casualty Report. The solution lies in the pro-active application of the four key factors referred to above. Shipowners must facilitate Knowledge and Awareness. Masters must provide Observation and Positive Control with support from experienced marine surveyors and shore management. It is a process which should be incorporated by way of detailed procedures into the ISM Code SMS manual on board every bulk carrier regardless of size or trade. MM therefore recommends that all MM members who operate bulk carriers review their SMS manual procedures and then upgrade and implement as appropriate.