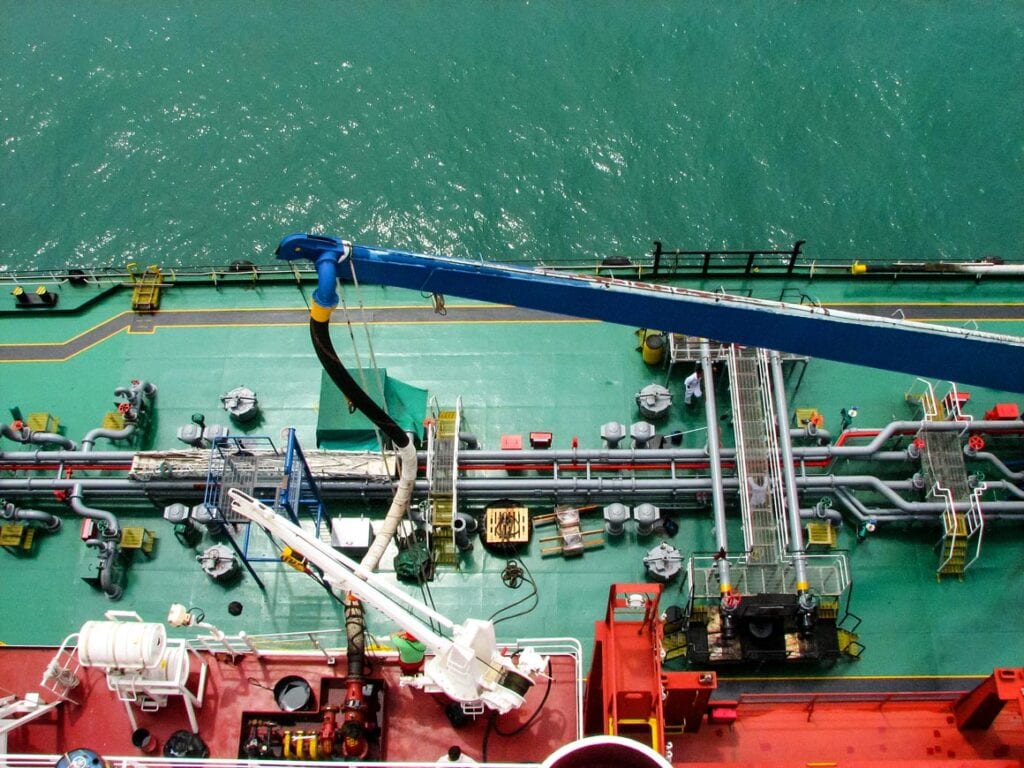 Ship bunkering generates a higher than usual port risk scenario due to the potential for bunker tank overflows, the bursting of defective bunker hoses or leakage from faulty bunker manifold connections. Such incidents can lead to significant oil pollution in port or coastal waters. The consequences can include, third party property damage and economic loss claims, hefty clean-up costs, likely vessel delay and even criminal negligence fines. In short, a routine process that can turn into a shipowner’s and shipmaster’s nightmare.

This Risk Bulletin is intended to provide a reminder to all Members, their Ship Managers, Masters and Chief Engineers of the necessity for comprehensive bunker planning and implementation together with regular audits and formal updates of ISM Code SMS bunkering procedures and Shipboard Oil Pollution Emergency Plans (SOPEPs).

Internet searches on reliable industry websites suggest that only a relatively small number of bunkering spills are caused by bunker hose or shipboard manifold failures. Instead, the majority of such spills appear to occur as consequence of bunker tanks being over filled and consequent overflows from maindeck bunker tank ventilation heads and sounding pipes. The focus of this Risk Bulletin will therefore be on the recurring overflow problem.

The initial overflow will be contained within permanent steel save-alls which (as depicted in the adjacent photo). must be fitted around bunker air vents and manifolds. However, the capacity of these save-alls is relatively small and they can be filled within seconds to then overflow to the maindeck. If maindeck drain scuppers have not been securely plugged, the overflow bunker oil will escape into the sea.

An internet review of bunkering incident reports suggests that the principal causes of bunker overflow and spill incidents appear are poor planning and human error. The processes for prevention and control of such incidents are discussed below.

The prevention and control of oil spills during bunkering can be separated into two distinct functions: Function 1., oil spill prevention, which can only be accomplished through careful bunker planning and stringent implementation; and Function 2, the control and clean-up of the oil spill during and after it has occurred. These two functions and their associated regulatory and industry best practice provisions are outlined below.

Function 1., bunker oil spill prevention, is a requirement of MARPOL (as explained below) but the written procedures required to accomplish prevention are obligated by the ISM Code (SOLAS Chapter 9). The ISM Code requires that all vessels of 500 GT or more engaged in international trade must be provided with an approved SMS containing detailed procedures for all shipboard operational functions. This includes bunkering planning and bunker spill control. For vessels in domestic trade, a similar SMS and associated bunkering procedures will normally be required under Non Convention Vessel Standard (NCVS) rules or similar national flag legislation.

The details of the requisite bunkering procedures must be ship specific and should, in order to demonstrate the exercise of due diligence, be in accordance with current industry best bunkering practice. A useful guide to industry best practice can be found in the latest 2020 6th. Ed. of the International Safety Guide for Tankers and Terminals (ISGOTT).

Although primarily intended for use in the tanker trades, ISGOTT includes an updated and very detailed ISGOTT Bunkering Checklist. This checklist covers the entire bunkering process from pre-arrival through to repetitive checks during loading and ends with the completion for delivery process for all vessels, whether tankers or otherwise.

Function 2., oil spill control and clean-up, in relation to all forms of oil pollution from ships, inclusive of both operational and casualty induced spills, is regulated by MARPOL 73/78 as amended. MARPOL requires that all tankers over 150 GT and all other vessels over 400 GT, if engaged in international trade, must be provided with an International Oil Pollution Prevention Certificate (IOPP). MARPOL also provides that regardless of whether such vessels are engaged in domestic or international trade, they must also be provided with a flag state approved Shipboard Oil Prevention Emergency Plan (SOPEP).

The SOPEP details what must be done and the equipment required to control and contain all oil spills from ships, inclusive of bunkering spills. For MMIA entered vessels in domestic trade which are under the aforementioned tonnage limits, members should check with their flag state authority to establish if there are regulations similar to MARPOL which may be applicable.

In relation to domestic and international trade vessels that are required to comply with MARPOL, members should note that the mandated SOPEP for each of their vessels must conform with the IMO Guidelines regarding the creation, content and approval of SOPEPs as listed below:

To accomplish the above goal, MM recommends to its members that they circulate a PDF copy of this Risk Bulletin to their Ship Managers, Masters and Chief Engineers with the request that they: